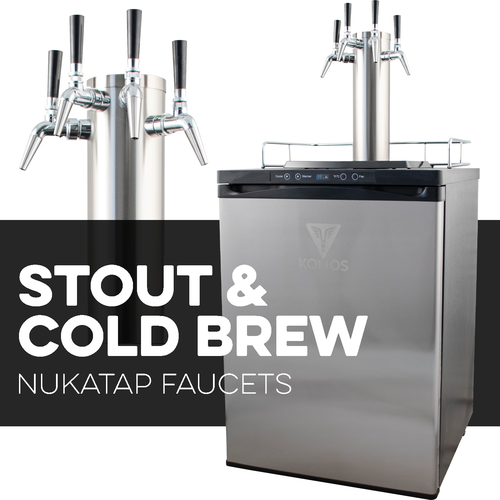 The KOMOS Stout & Cold Brew Coffee Kegerator comes with NukaTap faucets with Stout Spout attachments to give your beverage an extra creamy pour. Every unit also comes with an adapter to use the included KOMOS CO2 regulator with a Nitrogen gas cylinder. For each faucet, you will also receive the standard faucet spout so you can mix and match your taps and use some for Stout or Cold Brew and some for serving beer, soda, or other beverages.

Serving with Nitrogen
Nitrogen cylinders can be filled with either pure nitrogen or "Beer Gas", which is a blend of Nitrogen and CO2. Pure nitrogen is recommended for serving cold brew coffee in order to avoid the effects of carbonation. Carbonic acid dissolving into solution will change the mouthfeel of your cold brew and heighten the acidity and bitterness. Stouts, on the other hand, are commonly served with a mix of Nitrogen and CO2, and will give your pours that signature Guinness-like cascade of bubbles as CO2 is knocked out of solution when it passes through the stout spout's aerator disc. Beer gas can also be used to serve other styles of beer, or you can feed a pure CO2 line into the kegerator from a separate CO2 tank.

Please note that the kegerator only includes one regulator and does not include a nitrogen cylinder. An empty nitrogen tank can be added to your order above. If you plan to use two different types of gas, you will need to purchase a second regulator and gas cylinder.

NukaTap Forward Sealing Faucets
NukaTap is the newest brand of forward sealing faucets that boast a lower thermal mass for reduced first pour foam. They feature a "nuke-shaped" internal shuttle that is made from TPV, which provides superior laminar flow to further reduce foaming issues. If you prefer all stainless steel components in your beer faucet, we would suggest the kegerator configuration that comes with Intertap faucets. All faucet spout attachments and accessories are cross compatible between Intertap and NukaTap.

KOMOS Kegerator
The KOMOS Kegerator offers a stunning set of features that clearly separate this unit as the most modern kegerator on the market. With more interior space than other models, the KOMOS Kegerator is designed to fit up to four 5-gallon Slimline Torpedo kegs or Pepsi-style Ball Lock Corny kegs. Whether you choose the single, double, triple, or quad tap configuration, you'll receive NukaTap stainless steel faucets, the newest in forward-sealing faucet design. Stainless faucets are a huge upgrade over the chrome-plated brass faucets commonly included with other kegerators, and you'll quickly recognize the quality of a forward-sealing beer faucet compared to the standard taps seen at your local tavern or in-law's mancave. Rather than a chrome plated tower, the NukaTap faucets are mounted to a stainless steel tower that remains cool before, during, and after each pour thanks to a tower fan diverter that recirculates cold air within the kegerator and blows it up into the tower to keep your beer lines cold and reduce foaming. From keg to faucet, your beer will pass through EVABarrier draft lines, a premium double-walled tubing designed to protect against beer oxidation. And with Duotight push-to-connect fittings, you'll have your lines connected in a snap with no need to force the tubing over barb fittings or fiddle with hose clamps. Other features you'll love about the KOMOS Kegerator include its highly-efficient cooling capacity so you'll be serving ice cold beer even in the warmest temperatures, extra wide temperature range from 26–82°F, dual gas inlets at the back, stainless steel internal floor, rolling casters, and the included KOMOS Dual Gauge CO2 regulator.

This unit features an extended range digital controller that can adjust internal temperatures from 26 - 82°F. The higher end of this range is really convenient for homebrewers who often want to ferment at temperatures around 70°F. The digital controller always displays the temperature and is easily adjusted from the front of the kegerator with the door closed.
All kegerators NukaTap faucets to mount on the stainless tower. NukaTap is the newest brand of forward sealing faucets that boast a lower thermal mass for reduced first pour foam. They feature a "nuke-shaped" internal shuttle that is made from TPV, which provides superior laminar flow to further reduce foaming issues. If you prefer all stainless steel components in your beer faucet, we would suggest the kegerator configuration that comes with Intertap faucets. All faucet spout attachments and accessories are cross compatible between Intertap and NukaTap.
Our kegerators come standard with Duotight fittings and EVABarrier draft tubing. Duotight push-in fittings offer quick connection, a reliable seal, and versatility. Setting up and connecting draft line has never been easier -- no more hose clamps or heating water to soften tubing. Each kegerator comes with Duotight fittings for the tower shanks, regulator, and for splitting gas lines (double & triple tap only). EVABarrier double walled tubing offers superior protection against oxidation, CO2 loss, and microbial growth. It's also PVC-free and BPA-free.
The KOMOS kegerator boasts a list of other unique features for a kegerator in this price range, such as the tower fan, included KOMOS CO2 regulator, stainless floor, rolling casters, and countertop drip tray.

See below for the Kegerator Instruction Manual.

Documents
Community Q&A
Powered by TurnTo
Questions that need answers | My Posts
Start typing your question and we'll check if it was already asked and answered. Learn More
Do not include HTML, links, references to other stores, pricing or contact info.
My question is about:

If your question is about more than one item, click + to add them.

Reviews
Powered by TurnTo
Review More Purchases | My Posts
There are no reviews for this item. Write Review