by Paul Schwarz and Richard Horsley

Ever since its introduction to North America in the 17th century, barley has taken on a life of its own. Both two-row and six-row North American malted barley are rather different from their European cousins and have developed distinctive new characteristics. Genetics, climate, and breeding practices have produced a rich variety of malt qualities from which to choose.

A brewer's preference for two- or six-row barley can be born of a number of factors, including barley and malt purchase prices, quality specifications, and brewing traditions. Product quality is in turn affected by genetic makeup, environmental conditions, and the practices of the grower and the maltster.
It is widely believed that two-row barleys are the best barleys for malting and brewing (1). In fact, outside North America most of the world's brewing nations exclusively use two-row barley for malt. Six-row barleys, if produced overseas at all, are largely used only for feed.
The situation in North America, however, is rather different and warrants closer examination. Modern American brewing practices have relied on six-row barleys, partly because they were better adapted to many regions. In addition, barley breeding efforts over the past 50 years have reduced, if not obscured, some of the differences between two- and six-row barleys and malts. Yet important distinctions remain in terms of kernel size, extract, protein, and enzyme levels.
The historical preference for two-row barley is based on the fact that two-row barley yields malts with 1-2% greater theoretical extract, meaning that brewers can brew more beer. Large-scale brewers, however, must balance the higher extract yield against the higher cost and lower diastatic power of two-row malt. Small-scale brewers with less focus on extract yield may find the differences between the two negligible.
This article delineates some of the principal differences between North American six- and two-row malts in the context of historical developments and current production.

Overview: Cultivated barley (Hordeum vulgare) is not native to North America. English, Dutch, and French traders introduced barley to the eastern seaboard during the early years of European settlement (2,3). The Spanish introduced it to Mexico and the American Southwest. The imported English two-row barley enjoyed adequate growing conditions on the coast, but as production spread into western New York, six-row barley production dominated because of the climate. The increasing demand for beer in new midwestern and western cities continued to draw barley producers further west, luring them to agricultural lands more favorable to cereal grain crops. Improvements in the transportation system also helped make this westward shift possible.
North American production trends: United States. As of the mid- to late 1800s, U.S. barley production centered in the area now referred to as the Corn Belt (Iowa, Nebraska, Minnesota, and southern Wisconsin). Disease and competition from corn and soybean crops, however, led to the eventual decline of barley in this region, and U.S. production shifted elsewhere. Today, North Dakota and Minnesota produce the majority of the six-row malting barley in the United States, with lesser amounts produced in South Dakota and Idaho. Two-row barley production predominates in Montana, Idaho, Washington, Colorado, and Wyoming. Both climatic and qualitative differences contribute to the split.
Canada. Canada is now a world leader in malting barley cultivation. Production has gradually shifted from the East to the prairie provinces of Saskatchewan, Alberta, and, to a lesser extent, Manitoba. All three provinces grow both two-row and six-row malting barley cultivars, but two-row production dominates Canadian crops.
Mexico. Malting barley production in Mexico is almost exclusively six-row. Most production occurs in the central states, which are generally in close proximity to malt houses.

All two- and six-row malting barley varieties produced in Canada and the United States are spring types (Europe grows both spring and winter malting barleys). Seeding takes place in the spring, and harvest occurs from late summer to early fall. Grain yield and hence malt quality are influenced by many factors from seeding through harvest, including variety seeded, environment, diseases and pests, soil fertility, and the agronomic practices of the grower (see Table I).
Irrigation boosts yields in the western United States: The two-row varieties grown in the western United States realize the greatest yield potential, test weight, and kernel plumpness relative to all other barley produced in North America. This advantage comes largely because western barley is more likely to be irrigated by farmers growing under a contract with a maltster. Maltsters pay a premium as an incentive for farmers to grow high-quality malting barley cultivars rather than the better-yielding feed barley. The farmers can thus afford the costly irrigation. Barley not grown under contract is often grown under dryland conditions that limit the plant's growth potential. High daytime temperatures and/or lack of timely rains during critical periods of crop growth limit the grain yield and kernel plumpness. Irrigation helps mitigate the effects of adverse environmental conditions that can reduce the quality of the grain, thus ensuring a consistent supply of quality two-row malting barley.
Barley in dryland conditions: Six-row barley yields in the American Midwest are comparable to dryland yields of two-row barley in the West for many of the same reasons stated above (climate, irrigation). When western or European two-row cultivars are grown in the Midwest, they generally yield less and have fewer plump kernels than adapted six-row varieties. This is because the western two-row varieties were developed for areas that may get hot during the day, but that have cool nighttime temperatures that allow the plants to "recover"; the difference between daytime and nighttime temperatures is not as great in the Midwest as it is in the West. The cultivar Triumph developed in Germany, for example, has been successfully produced in the American West.
Disease pressure in the Midwest also limits the yield of many two-row cultivars. On the other hand, midwestern six-row cultivars (with a wider range of adaptation) transplanted to the West have yields comparable to two-row varieties. Consequently, some midwestern varieties are grown under contract in the western United States; the contracting of barley in the Midwest, however, is limited.
Canadian barley is grown almost exclusively under dryland conditions, but these conditions are not necessarily equivalent to those of the American Midwest; growing conditions (rainfall, length of season, temperature, and so forth) vary between, and even within, provinces, allowing the growth of both two- and six-row barley. Western Canadian yields are, on average, lower than those for irrigated western U.S. barley.
Only a small amount of Mexican barley is irrigated.

Although breeding programs have minimized the differences between two- and six-row barley, differences remain in terms of kernel size/uniformity, grain protein content, and malt enzyme levels (3). Kernel size and protein directly influence the manner in which six- and two-row barleys are malted by affecting the rate of water uptake, germination, and modification (see Tables I and II). 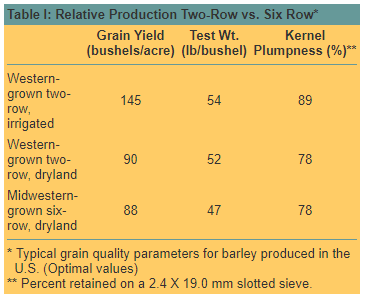 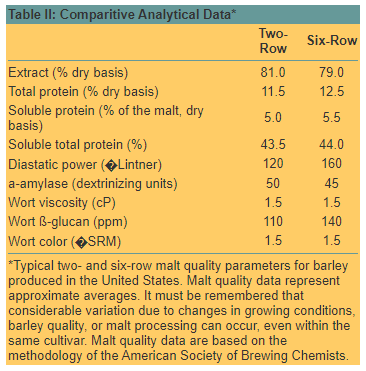 A World of Choices

Many differences distinguish two- and six-row malt, but these differences have become less pronounced over the past 20 years as new varieties have been bred. The high protein and enzyme content of six-row barley makes it unlikely that a brewer producing an all-malt beer would wish to use exclusively six-row malt. Supplementing two-row malt with some six-row malt, however, might serve to increase extraction, conversion time, and fermentability, especially with high proportions of adjunct. Although most craft brewers don't normally use corn and rice, other unmalted grains such as wheat, barley, and oats are becoming increasingly common.
On a final note, it should be mentioned that every barley cultivar, whether six-row or two-row, can have distinct effects on the organoleptic (flavor, aroma, color) characteristics of beer (3). Two-row malts are generally believed to yield a mellower flavor, but these differences are very difficult to quantify. Malting barley and malt are marketed on the basis of cultivar, and, thanks to modern breeding practices, brewers have a world of options when choosing which cultivar best meets their processing and beer quality requirements.
Acknowledgements
The authors thank Sherman Chan, Scott Heisel, John Holt, Norman Kendall, Mauro Zamora Diaz, John Mittleider, and William Wilson for their valuable input. Statistics on barley production in Canada and the United States were from reports provided by the American Malting Barley Association (Milwaukee, Wisconsin) and the Brewing and Malting Barley Research Institute (Winnipeg, Manitoba, Canada).

All contents copyright 2021 by MoreFlavor Inc. All rights reserved. No part of this document or the related files may be reproduced or transmitted in any form, by any means (electronic, photocopying, recording, or otherwise) without the prior written permission of the publisher.